Dead Ends is a series of promenade theater performances based on local history performed on and around traffic signs. Each performance was created in a new unique version based on a chosen route in an urban surrounding. The shows were created under short and intensive artist residencies in each city during with local stories were collected and the interpretations of the street signs developed.

The project was premièred in April 2013 in Barcelona, and has afterwards been performed in The Netherlands (in Amersfoort and in Midsland in Terschelling), in Norway (Tromsø), in England (Kendal), in Sweden (Stockholm) and in Finland (on 3 different locations in Turku). Performances have been comissioned for and co-produced by: Olohuone 306,4 km2 Urban Art Festival and Kaupunginosaviikot (Turku), Mintfest (Kendal), Spoffin street arts-festival (Amersfoort), Oerol festival (Terschelling), Vårscenefest (Tromsø) and Centro de Cultivos Contemporaneos del Barrio (Barcelona) 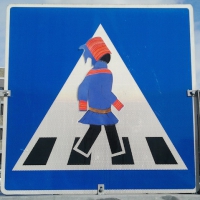